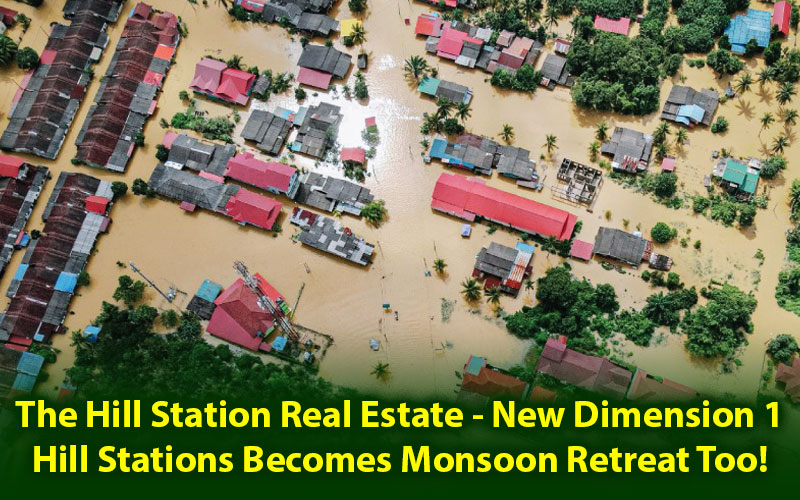 Summer retreats in the hills are not a new phenomenon. In earlier times Indian kings and rulers used to travel to the hills to escape the hot summer months. After the arrival of the British, this became a more popular pursuit for many families, and today crowds flock to hill stations thanks to easy information available on the internet.

But now in a new trend, hill stations are becoming monsoon retreats too!

This is not actually surprising as it is really the coolest thing to do!

The City floats & chokes during the Monsoon Season

Climate change not only brings soaring summer temperatures, but also unprecedented heavy rains in many major cities in India. At the same time, these cities have seen abnormal construction growth, enormous concrete surfacing and blockage of natural water drains. When it comes to the coastal cities, they have to contend with additional issue of frequent low pressure scenarios and more devastating cyclones. Combined effect of these factors, leading to the catastrophic flooding like the one which Chennai experienced in 2015 and now in 2021. Other cities like Mumbai face this almost every year.

Despite exceptional preventive measures taken by respective government bodies, the above situation is becoming unavoidable during the monsoon season, especially in our coastal cities. Post rain, these city dwellers face damaged roads, contaminated water sources and related issues till they are fixed.

Hill Stations are Heavenly during the Winter Season

On the other hand, though the hill stations receive much more rain than the cities in the plains and origins of many rivers

When trees do fall, they are removed very quickly with the help of modern power saws, and road blocks are cleared in a couple of hours. Post rain, the roads are almost intact in hill stations due to its natural slope and drains. Though there are a few land-slide-prone areas in hill stations, they are clearly identified and are indicated as “No Construction Zones”.

Comparatively, hill stations are proven to be safe havens during rainy seasons.

As a fact, Part of South India receives rain during both the North East and South West Monsoons, and its coastal towns face frequent low pressure effects/cyclones. As rains lashed Tamil Nadu towards the end of this year, the above factors influenced city dwellers, especially on the coast line, and propelled many to do increased online searches for houses/farm houses/villas/bungalows and apartments for sale in Ooty, Coonoor, Kotagiri, Gudalur, Kodaikanal, Yercaud, Yelagiri, Kolli Hills, Yelagiri and Valparai at the budget range of Rs.75 Lacs and above. The increase in search volume for land/plots for sale in these hill stations by a segment of people at a budget range of Rs.25 Lacs to 75 Lacs also noticed who prefer to buy land in hill stations and construct on their own for two reasons - to have the hill home of their dreams, and for economic construction cost.

Considering the above, similar would be the case of increased searches for houses/villas/farm houses/apartments/land and plots for sale in Munnar and Wayanad by the Kerala costal population; in Coorg and Chikmagalur by the Karnataka costal population; in Lonavala, Panchgani, and Mahabaleshwar by the Mumbai population, and in Darjeeling by the Kolkata population, etc, during their respective rainy seasons.

This means hill stations are suitable for retreat not only during summer, but also during rainy seasons for the monsoon affecting cities / metro dwellers. It is an indication that the hill station real estate is poised for a sharp increase in the near future, with greater demand and higher ROI compared to Real Estate in Chennai, Mumbai, Kolkata, etc. At present the property prices in hill stations are much lower while comparing to the cities and metros and it is the right time to invest / buy property in hill stations - A safe heaven above the clouds.

The Gateway to Monsoon Retreat

If you are looking at property for sale in Ooty, Coonoor, Kotagiri, Kodaikanal, Yercaud, Yelagiri, Kolli Hills, Valparai, Wayanad, Munnar, Coorg, Chikmagalur, Lonavala, Panchgani, Mahabaleshwar, Nainital, Dehradun, Kullu-Manali, Mussoorie, Shimla, Darjeeling and other hill stations – Hills & Wills is the best choice for you to find a wide range of properties across Indian hill stations, be it tiny or luxury, with different views, at various altitudes and climates. Buyers can connect with the property advertisers directly through a simple registration process and a pocket-friendly subscription fee with huge savings on brokerage.

If you are a hill property seller, you can post property Ad for free on www.hillsandwills.com, display your property more specially than elsewhere, and reach beyond normal boundaries – Hills & Wills is the ultimate way to sell property online quickly in the hills and for a fair price. You can also post multiple property Ads for free with higher validity – An unparallel seller support in the online property portal industry.

Hills & Wills strongly believes that clients need to have adequate knowledge about hill real estate before they invest in hill station or decide to buy property in hill station, and will continue to  educate them on other dimensions of hill station real estate through ‘The Hill Station Real Estate – New Dimension 2’, coming out soon.

Find Other Dimensions of Hill Realty

The Hill Station Real Estate - New Dimension 2 - Gateway to get away from Pandemic!