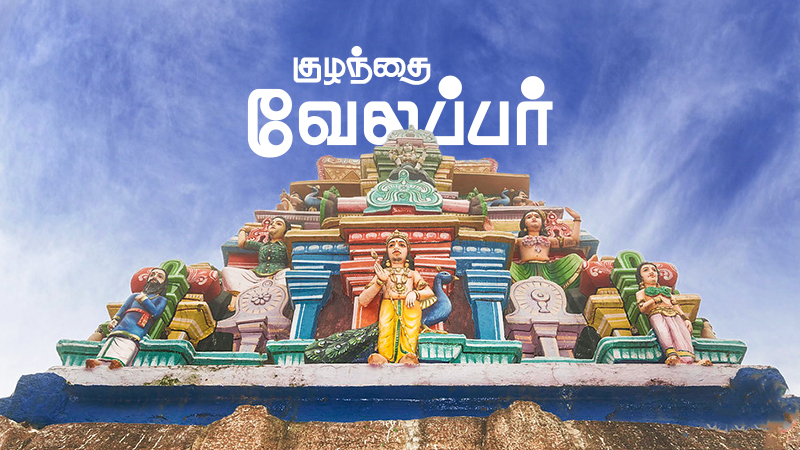 Trips are of two types. There are the ones that we take as pilgrims, and the others that we take as tourists. But is there a possibility, to be both at the same time? There is – only at two places in India. We are going to take a look at one of them in this blog.

Indians, especially the Tamils and their kings down South have always been pioneers of Engineering, cultural richness and architectural wonders throughout our history. Thanjai Periya Kovil, The ‘holy’ Arulmigu Dhandayuthapani Temple in Palani, the Kapaleeshwarar temple in Chennai – these are temples that everybody flock to, not just because of their grandeur across time, their architectural intricacy and the Deity that resides in the temple, but also because of the rich history that surrounds the temple. But these aren’t the only temples that were constructed by the Indian kings, were they?

Adding up to the list of not so famous temples is the Kuzhandhai Velappar Temple, at the Poombarai Village, near Kodaikanal and standing atop Palani hills. What’s so unique and historically important about this temple? That’s what we’ll see through the course of this blog.

This is a temple that is located in a village called Poombarai, a scenic place at around 20 kilometers from Kodaikanal. From the name, one can identify it as a temple for Lord Murugan, (Karthik to the North Indians), who is also considered as ‘Thamizh Kadavul” (God of the Tamils), but it is not just another temple in Tamil Nadu, but has something special and mystique in the background – its rich and deep history? That’s something exciting about this temple, but there’s something else that makes this temple extra special.

Arunagirinathar, known to be a wandering poet, a saint, that travels through different places and different temples. From one of his songs (Poombarai Velan), he was saved by the deity of the village, Poombarai Murugan while travelling through, him from an attacking demon, in the form of a baby. On account of this incident was how the term ‘Kuzhandhai Velappar’, translating directly to the child with the ‘Vel’ (Spear) in Tamil, was coined.

Bogar – the man behind the masterpiece

Bogar, is an ancient saint, sculptor and a part of the 8 Siddhas of Ancient Tamil History. He is the man that had sculpted the idol of the Deity. According to legends from 3000 years ago, he had to work extremely fast to complete the rest of the body of the idol, as he had spent too much time sculpting the head of the Deity with all the finesse. One can evidently see the difference in the levels of details on the sculpture at the temple.

The Temple and its History

The Deity that was constructed by Bogar was worshipped and revered for decades, before it started becoming inundated and engulfed into the forests that surrounded the deity. Many decades later, when the Chera King, Perumal, took shelter in this temple, near the shrine from a hunting expedition was the time this temple got its resurrection and took shape to what it is now. The ancient tale has it that Lord Muruga himself instructed the king, in his dreams to resurrect the temple. Thus, the Kuzhandhai Velappar Temple of today was constructed.

At the southwestern end of the temple, there is a shrine for the sage, Bogar, which is said to be connected to a tunnel, leading to a cave at the centre of the hills, where the sage himself is meditating along with the deity.

What’s the most exciting thing about this temple?

We all know the iconic temple in Palani, the Arulmigu Dhandayuthapani Swamy Temple, where the deity is made out of an Amalgam called Navapashanam. This temple, The Kuzhandhai Velappar temple too was composed of such an amalgam, after Bogar returned from China, post the completion of the idol for the Palani temple. Being one of the oldest temples from the history of mankind, there isn’t much evidence to the exact history of the temple.

You’d probably be wondering why one would make something as holy as the idol for the deity, Poombarai Velan? Well, we’ve known Bogar, as a sage and as a sculptor, but have forgotten the fact that he’s a part of the 8 Siddhas – masters of ancient Tamil medicine. The nine poisons, when amalgamated in the right proportions was the antidote to a variety of diseases, thus making it extra special. The idol of the deity in the iconic temple at Palani, was also sculpted out of this amalgam.

But here comes the twist.

There’s always been a debate that’s been going on, on whether the Kuzhandhai Velan has been sculpted out of Navapashanam or Dasapashanam.

YES! A similar amalgam of 10 different poisons. This debate makes this temple, extra special and a must visit for anybody that visits or lives in and around Kodaikanal. This debate still remains without a conclusion – Navapashanam or Dasapashanam, adding up to the excitement created by the architectural and historical background of this temple.

India has always been boasting about the Indus Valley Civilization and its advancement that was way ahead of its time, but the history of the Navapashanam, Dasapashanam and the temples in and around the Palani hill range, root back to 3000 years ago, showcasing the advancement of the ancient Tamils’ advancements in the fields of Medicine, Architecture and Art. With the discovery of other artefacts such as the prehistoric dolmens, and the remains of the primitive “Kuzhandhai Velappar” temple, more and more light has been shed on the ancient ‘Kurinji Nagarigam.

Being a Property Management Company exclusive to major South Indian hill stations, we, at Hills & Wills have always been hungry to know every single thing about the hill stations that we love. We took an extra effort, to shed the light on the archaeological scene in the Poombarai and Palani hill regions. With the demands of the public, the Government has now agreed to conduct exploration studies post the discovery of the artefacts, which might bring the ancient ‘Kurinji Nagarigam’ (Mountain Civilization) to the limelight.

We all have known Kodaikanal to be an exciting place for tourism, but now it might be the home to ancient history too. When perceived from a Real Estate aspect, this could increase the value of the land in Kodaikanal by multiple times.
Be a part of a rich and ancient history; buy property in Kodaikanal now, for in the near future, finding property for sale in Kodaikanal could become difficult.

Looking for Buy Property in Kodaikanal?